Is the Value of Your Business’s Trademark(s) Increasing or Decreasing During these Times?

In the wake of George Floyd’s murder, police brutality, and racial injustice protests that ensued afterwards, many businesses are trying to figure out how to navigate preserving the value of their trademark(s).

The Importance of Value-Led Businesses

Companies’ responses to these trying times are how they will prove to their target audience that their brand aligns with their “diversity” and “inclusion” values.

Ben & Jerry’s is setting the gold standard for how businesses can protest racial injustices and police brutality which consequently adds substantial value to their trademark(s). The ice cream company did not stall in issuing their statement. They were also very clear about their stance on the issues and took the time to take everyone on an educational journey to explain how we got to where we are today. 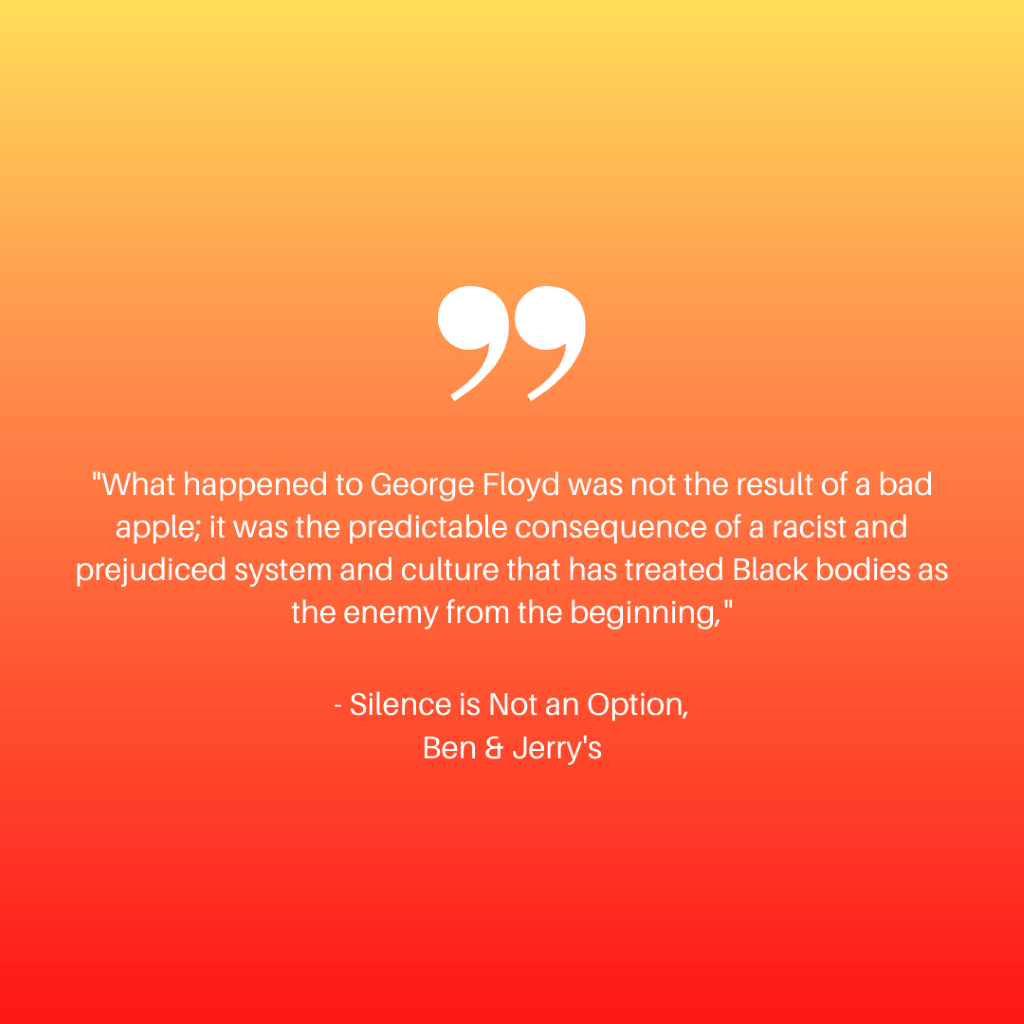 Instead of tiptoeing around the topic, Ben & Jerry’s addressed the issues head-on and called out specific historical systems that have led to the continued oppression of America’s black citizens.

Acknowledging the pain of a community is the first step in being able to empathize with them and create a solution. After acknowledging the racial inequality and forcefully denouncing injustices, Ben & Jerry’s followed their allyship with action, as evidenced by their social media post below. Active allyship is much more valuable than performative allyship. 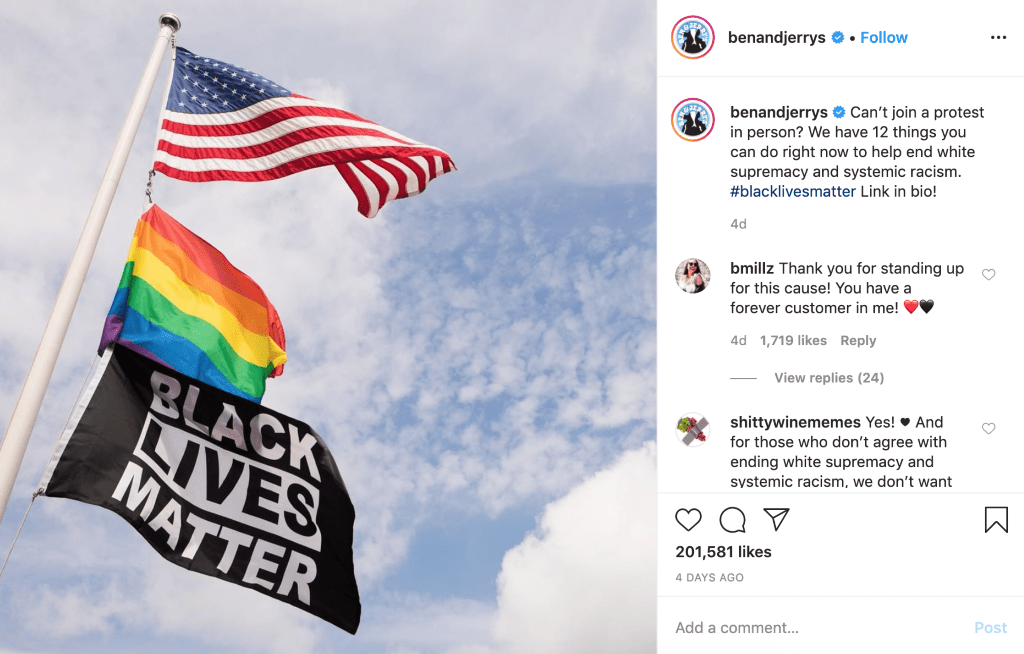 Ben & Jerry’s went beyond merely sharing a statement followed by silence. Instead, they continued to share helpful resources, information about peaceful protests, educational materials, petitions to sign, and applications to register to vote.

Furthermore, their public support for the Black Lives Matter movement is accompanied by steps the company is taking to be part of the solution. Here is an excerpt from the “Silence is NOT an Option” statement by Ben & Jerry’s, which you can find in full by clicking here:

“Four years ago, we publicly stated our support for the Black Lives Matter movement. Today, we want to be even more clear about the urgent need to take concrete steps to dismantle white supremacy in all its forms. To do that, we are calling for four things:

First, we call upon President Trump, elected officials, and political parties to commit our nation to a formal process of healing and reconciliation. Instead of calling for the use of aggressive tactics on protestors, the President must take the first step by disavowing white supremacists and nationalist groups that overtly support him, and by not using his Twitter feed to promote and normalize their ideas and agendas. The world is watching America’s response.

Second, we call upon the Congress to pass H.R. 40, legislation that would create a commission to study the effects of slavery and discrimination from 1619 to the present and recommend appropriate remedies. We cannot move forward together as a nation until we begin to grapple with the sins of our past. Slavery, Jim Crow, and segregation were systems of legalized and monetized white supremacy for which generations of Black and Brown people paid an immeasurable price. That cost must be acknowledged and the privilege that accrued to some at the expense of others must be reckoned with and redressed.

Third, we support Floyd’s family’s call to create a national task force that would draft bipartisan legislation aimed at ending racial violence and increasing police accountability. We can’t continue to fund a criminal justice system that perpetuates mass incarceration while at the same time threatens the lives of a whole segment of the population.

And finally, we call on the Department of Justice to reinvigorate its Civil Rights Division as a staunch defender of the rights of Black and Brown people. The DOJ must also reinstate policies rolled back under the Trump Administration, such as consent decrees to curb police abuses.”

As a result of their involved approach to the movement, Ben & Jerry’s has reportedly noticed both greater customer loyalty and stronger bonds between their consumers and their employees because of their social justice measures which, by the way, had absolutely nothing to do with ice cream.

While customers or clients may be too distracted to purchase from your business in the current social landscape, your company’s willingness to “show up” for them and stand in solidarity against injustice will leave a lasting imprint. When the time comes to make a purchase in your company’s industry, they will return as loyal consumers that remembered how your company authentically represented its values without asking for a single dollar in return.

These are the businesses of the future. These businesses champion their values will long outlast those that use trendy, performative buzzwords as a façade to entice consumers.

Helpful Resources for You

Are you a new business owner trying to build the value of your company’s trademark(s)?

Our lead attorney at the Benkabbou Law Firm, PLLC, Salma Benkabbou, Esq., The Millennial Business Lawyer®, talks about the value of your company’s trademark(s) during social injustice protests on her podcast, Keeping It Real In Business™. Click here to listen to the episode.

If you liked this blog post and found it helpful, please consider subscribing to our newsletter. We skip the legal jargon and send the need-to-know updates straight to your inbox. Join our newsletter here.