Hästens is suing a small business for using a checkered pattern. Can they really “own” a pattern? 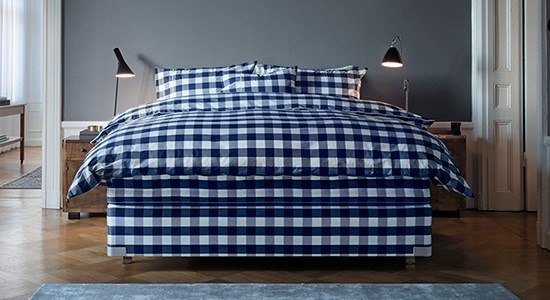 The owners of Coco & Dash Home, a family-owned furniture store in Dallas, are unexpectedly being targeted by Hästens, a Swedish producer of high-end mattresses.

A blue and white checkered pattern is at the center of this trademark dispute.

Hästens, a Swedish luxury mattress maker, holds exclusive rights to its blue-and-white checkered pattern in the U.S. for use on everything from furniture to curtains and table coverings.

So, when Hästens learned that the owners of Coco & Dash Home created a custom blue-and-white checkered sofa they sent a cease-and-desist letter. The letter states that the products Coco & Dash Home offers feature an almost identical design to the Hästens Check Designs.

An attorney for Hästens said that Coco & Dash’s use of a blue-and-white checkered pattern on a sofa represents an unauthorized use of “Hästens Check Design” that is “likely to create confusion in the marketplace as to the source of the goods.”

Teddie and Courtney Garrigan, the mother-daughter team that owns the award-winning home decor retail shop, disagree with the notion that any and all uses of blue-and-white checked fabric should be considered and referred to as Hästens Blue Check. They are taking the Sweden–based company to court in the hopes that a judge will issue an order that cancels some of the registered trademarks Hästens has on file with the U.S. Patent and Trademark Office.

Hästens has demanded that Coco & Dash Home not only stop selling the item but “provide a full accounting of all products sold bearing the Hästens Check Designs.” If the case goes to litigation and the court finds that Coco & Dash willfully produced a “counterfeit,” damages could range up to $2 million.

In a past case, the Swedish brand went to court against a Texas home goods retailer, Caitlin Wilson, which is located down the street from Coco & Dash. The items at the center of the case included a pillow and a roll of fabric.

Wilson fought back in court, arguing that blue gingham originated in the 17th century, 200 years before Hästens was founded. Furthermore, it had been used as everything from the material for Dorothy’s costume in The Wizard of Oz to Marianne’s dress on Gilligan’s Island. Still, the lawsuit progressed through the court system, and eventually settled before reaching a trial.

Under US trademark law a fabric design may be protected. However, designs of this type are not considered “inherently distinctive,” and acquired distinctiveness or secondary meaning must be demonstrated before protection can be claimed.

Interestingly, in November of 2018 Hästens failed to register its blue-and-white checked pattern as a European trademark.  The Board of Appeal of the European Trademark Office EUIPO concluded that consumers would primarily have seen the pattern as a decorative or style element rather than as a trademark.

This reflects the differences in approach that IP Offices in different countries may have to issues such as distinctiveness and demonstrates that subtle changes can mean the difference between acceptance and rejection of a trademark.